There are so many amazing and thrilling photographs at the Wildlife Photographer of the Year exhibition on in CHQ at the moment, it's odd that the one chosen as the winning entry is in my eyes one of the few dull ones. (It seems to have received very few of the public votes as well.)

Though I loved lots of the straight-up compositions for their natural beauty or immediate drama and spectacle, I leaned towards the subset that displayed some element of art, ones that reminded me of paintings or emphasised something beautiful in the form, colour or context of the subject. 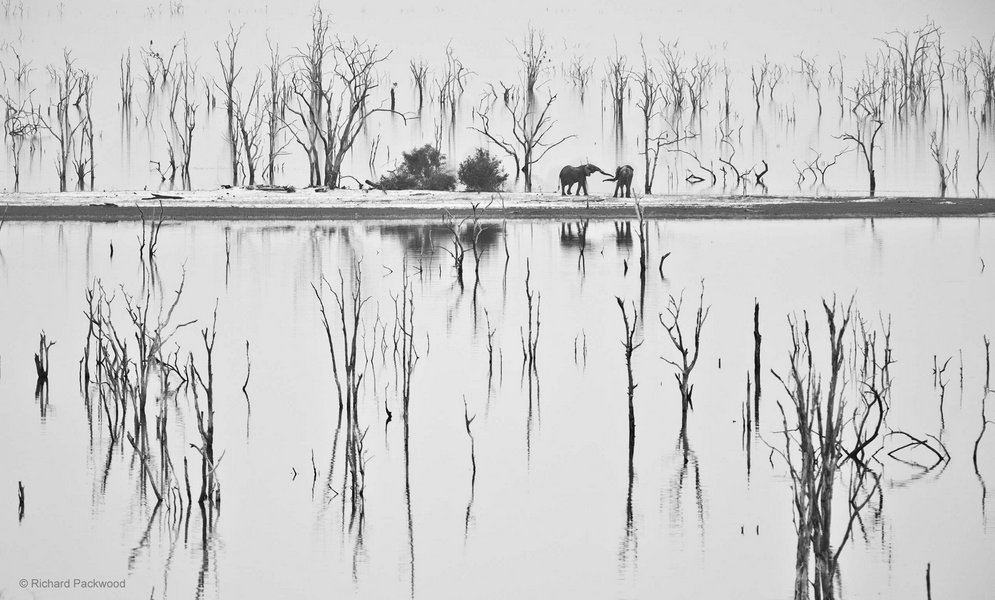 I voted in the end for Richard Packwood's 'The Greeting'. I love the internal harmonies, the musicality of the elements, as well as the more obvious narrative suggestiveness of the two elephants interacting. The bravery too in presenting it as a black and white image reminds me of the maxim: less is more.

The remains of trees half-submerged in Lake Kariba, the world's largest (by volume) artificial lake, stand sentry around a spit of land. They are ghostly reminders of an ecosystem that was flooded in the late 1950s and early 1960s by the construction of the massive Kariba Dam across the Zambezi River, between Zimbabwe and Zambia. As the lake formed, some 6,000 large animals, including elephants, were relocated as part of Operation Noah, many of them to Matusadona National Park. The lake forms the northern boundary of the park, which is very remote. 'Most people get around by boat,' says Richard. 'We were the first visitors to our camp for five years.' Attracted to this view of the lake by the surreal atmosphere, Richard began watching a lone elephant splashing about in the water. When he realised that another one was fast approaching along the sand spit and that the two would greet each other, he knew he had the chance of a magical shot. That he managed to catch the moment unobscured by any of the trees was a matter of luck, as he had limited time to move position. So for him the shot is a gift from nature.