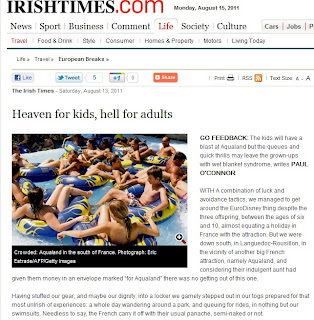 I had to cut the article down considerably for publication - see Times here >>>. And here's a fuller version >

With a combination of luck and avoidance tactics, we managed to get around the EuroDisney thing despite the three offspring between the ages of six and 10 practically equating France with that attraction. But we were in Languedoc-Rousillon, in the vicinity of another big French attraction, namely Aqualand, and considering their indulgent aunt had given them money marked ‘For Aqualand’, there was no getting out of this one.

Picture all the rides you’ve ever seen in an average playground and then add growth hormone, psychedelic inspiration, distorting mirrors and water. Slides, gutters and pipes of all shapes & sizes, in a park of moulded multi-coloured plastic, reaching up into the blue sky at every conceivable angle; running, filled or overflowing with chlorinated water, and accessed via steel stairwells leading to tree-height platforms.

Empty of people, it must be fascinating for engineers, insurance actuaries and suchlike to contemplate the admirable structures and their relationship with gravity and risk. To the kids this was a shrine to the fun gods. To us it was a safety quandary.

Having stuffed our gear, and maybe our dignity, into a locker we gamely stepped out in our togs prepared for that most unIrish of experiences: a whole day wandering around a park, and queuing for rides, in nothing but our swimsuits. Never mind there being no elbow room at a concert, or standing shoulder to shoulder at the match, in typical French style this is more bum to bum and chest to breast as, semi-naked, you wend your way among your fellow water-worshippers on the narrow pathways from ride to ride and between the crowd control railings at each. You may be used to the conventions that make near-nudity acceptable on the beach, but it takes a little adjusting of one’s perspective to get used to this standing around and walking along semi-clad in an amusement park. Needless to say, the French carry it off with their usual panache, semi-naked or not.

It’s nearly all bikinis for the girls and mostly either briefs or boxers styles for the boys. It’s mostly thrill-seeking teenagers in groups, but there is a high proportion of families and even some unaccompanied adults – although, they may just have become detached from their children. It’s mostly French, although we did have to queue at one stage for half and hour near an irritating bunch of a Irish teenage lads who spent their time commenting on their so rarely exposed bodily features.

Most of the rides are given English names, not to help the minority tourists, but reflecting the French weakness for English when they want to sound cool. “Crazy Race”, our first stop, is a racetrack of side-by-side water slides, gently waved to give that essential stomach-lurch thrill half way through. Most of the adults sit upright and concentrate on retaining some semblance of dignity as they splash through the water down the slope in their togs being watched by hundreds of strangers. Some have no shame and try to mimic the youth in testing out different positions – lying supine, lifting limbs, and ultimately looking remarkably like penguins from Happy Feet slipping gleefully down ice slopes. Some even manage to get a little bit of a lift-off on the hump and are momentarily flying!

We went down in parallel as a family and enjoyed it enough to line up again immediately for another go. We went from there to the “Anaconda”. When our youngest saw the somewhat deeper pool at the end of this ride, being uncomfortable with putting her face in the water, she decided to give it a miss and took off with her mother to find the kiddy’s section – a miniaturised version, a training ground for the future Aqualand customers.

I and the other two children duly queued up for “Anaconda” to collect a spongy mat each from those already descended. As we watched them spill off the end of the gutter and splash, limbs every which way, into the pool beneath, an image from Dante’s Inferno troubled me, but I continued to wait. Sadly after taking possession of the mats, we had to join another queue winding slowly up a steel stairwell, making me dizzier and queasier with every step. Realising at the top that pulling out would have been too embarrassing for my kids, I found myself adopting the required position, face down on the mat at the mouth of the twisting gutter, ready to take the fast route down. I found it to be a most unpleasant experience, chlorinated water constantly splashing up my nostrils, twisting and turning up and around the gutter and all the time picking up speed and losing control, wondering if I’d be an exception to the laws of physics they’d used to design this one.

The next queue was off-putting enough but when I beheld the scale of the ride itself, I decided to opt out. “The Wave” is a massive U shape of folded plastic lifted high in the sky on a steel frame. Sinners, holding onto the handles of their float for dear life, are pushed in two-man, figure-of-eight plastic floats from the top of one side of the U to be let fall almost straight down one side into the water trough below and slide up high on the opposite face, and so on until they come to rest, shaken and keen to disembark.

The children immediately joined the procession. I spent the best part of the next hour sitting on a scrubby bit of ground in front of “The Wave”, with other Dante types. I imagined errors in the design or exceptions in the trajectories, while watching two of my children slowly wend their way along the stanchions of the queue system, my sense of foreboding as to their safety growing with every scream from the descending souls, and not alleviated by the piped Beach Boys.

They survived and claimed, despite panic-stricken facial expressions that suggested otherwise, to have enjoyed it. We re-formed as a family and took a welcome relaxing trip down the “Congo River” in individual doughnut floats. Our youngest loved this one, and the absence of thrills and spills meant no queues and a very willing father.

The queuing for “Big Bob” would be a better explanation of its name than the fun payload, and “Twister” has fewer twists than its line-up had turns, but at least “Black Hole” was enough to scare off our kids and save us from that wait.

Finally, “Surf Beach” presented us with what my wife called a ‘soup of people’ floating around in a chlorine sea, chanting over and over for ‘La vague’ reminiscent of the aliens in Toy Story worshipping ‘the claw’. A similar pool is to be found at our own National Aquatic Centre, but the French do it in their inimitable way. A bell rang out, more bodies gathered in and cheers went up as some unseen mechanical arm generated the beginnings of a wave that spread and grew in vigour across the pool over the following few minutes. Ashore, others sat or lay in the sun, looking to all intents and purposes as if they were on an actual beach except for the fact that there was no one playing the usual beach racket ball or smoking.

Combining a good few of my bêtes-noir, including heights, crowds, queues and cheap thrills (which leave only a hunger for more), Aqualand was never going to be my kind of outing. But when I saw my youngest leaping joyfully in her armbands over the man-made waves, and the next one jumping time and again from the edge into the pool in every conceivable arrangement of limbs with the exception the one you’d call a dive, and the eldest witnessing the unfettered way the unselfconscious French lapped it all up, I appreciated that it was more a heaven than a hell.

Email ThisBlogThis!Share to TwitterShare to FacebookShare to Pinterest
Labels: Journalism