Taking the art out of the bog

(Another one of the features I did for Cara magazine way back when. This time about painter Sean McSweeney. This is the uncut version.)

Sean McSweeney is one of Ireland’s finest landscape painters. Since moving to Sligo in 1984 he has, to powerful effect, scarcely lifted his painter’s eyes from the bog pools that mark the landscape around his studio and home.
Sean McSweeney has visions of bog lands, or, more accurately, of bog pools formed as a result of years of rain and spring water filling the holes of worked out and abandoned cuttings. When I visited him in April he led me through a network of such pools to show me the ones that set off most of his work. He was excited to see the pink flowers of the bog bean plant beginning to mottle the greenery. “They’re early,” he said. “Beautiful, aren’t they? Squint, and you’ll see them better.” I complied, and the watery surface shimmered, the protruding vegetation blurred, and the flecks of colour danced. The scene became dreamlike. When I met him most recently he was on his way to the rugged island of Inis Murray off the Sligo coast to paint shorelines for a while, but expressed a self-mocking and joking concern, with maybe some truth in it, that he might still end up painting bogs.
Curious to say, bogs have been more important in Irish society than paintings. The Atlas of the Irish Landscape tells us that “the bog has been etched as deeply into the human as into the physical record in Ireland, to an extent unrivalled elsewhere in Europe.” Indeed, bogs were once the sole source of fuel in many parts of Ireland. But they have long since been superseded, and now have little or no utility for most people and a much-diminished function generally. Analogously, painting too once played a more day-to-day role in society as a powerful tool of graphic communication than it does today as mere supplementary decoration and “art”.
In relation to both bog pools and paintings Sean McSweeney is sensitive to that movement from utility to adornment, that tension between necessity and indulgence. He emphasises the craftsmanship and physicality of painting, and uses the label painter more often than he does artist. You might say he labours rather than creates, and he has a very disciplined approach to working. McSweeney’s father was a painter-decorator by trade, but attended the College of Art in Dublin at night for some years and became quite a skilled amateur painter. After his untimely death when his son Sean was only five, his paintings remained about the house, less as works of art than as household utensils such as fire screens and fans for flaming the wet turf. (McSweeney thinks one of his father’s best works was a painting of Ben Bulben in Sligo.) McSweeney, like his bog paintings, is about as down-to-earth as you get, yet from early on all he wanted to do was make pictures. And he has done so ever since, however difficult it made life at times and however marginal an activity it may have seemed. He is now a highly successful artist whose work is admired and collected by people all around the world. 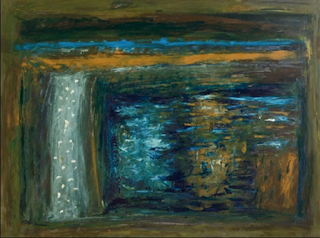 He was a loner, shying away from organised groups of artists. He and his wife Sheila eventually left Dublin to live in west Wicklow, suggesting that McSweeney was a countryman at heart, desirous of closer proximity to nature than occasional visits to Phoenix Park gave. He does not believe that it is a prerequisite of good landscape painting to live in the country, but he did feel the need himself to get to know the seasons and light more intimately, “to get to grips with the structure of landscape” as he says. He does not romanticise the life in any way, emphasising the austerity and difficulties. They were lean times for painters and their families. (McSweeney is implicit about how important his wife has been in his career, talking always in terms of “we”.) At around this time he entered what one might call, after Dickens, ‘a bog of uncertainty’. He had a row with his dealer over the sale of a painting, he was barely making ends meet in the harsh landscape of “a hungry mountainside”, and one or two critics had been pointing to a lack of structure in his work. What got him out of the hole, he says, was going into the landscape with his sketchbooks to look hard at the marks man had made on his surroundings. “Through those drawings the compositions hardened,” he says. Things began to pick up. He did a series of paintings based on a clearance of the land by the Forestry and on scarecrows. He also moved to Sligo.
As with his father’s county of Meath where the beeches and oaks gave “a vertical accent to the place”, Wicklow’s hills and trees had meant that he was always looking up to take in the uprightness of the landscape. But the part of Sligo he settled in was very different, lying flat and beneath eye level. It took him a while to adjust but once he did the work took off – literally, in that he had to imagine himself as a bird flying over the pools in order to get a functional perspective on them.
Of course, County Sligo offered many famously picturesque sights - Ben Bulben, Knocknarea, Lough Gill, to name a few; but McSweeney’s artistic vision never drew him to such obvious spectacle. Ben Bulben is surely an exception though, especially considering the connection with his father and with Yeats. I ask him when he will paint it and he answers, smiling, “Oh, when it’s ready”, and continues his whistling stroll through the bog.

Great to read this again Paul -
really got a sense of sean's work and his place -
any sign of the piece you did on me! Someone was stranded in an airport a few years back and read it - blog on, Cormac