(Another one of the features I did for Cara magazine way back when. This one is about visual artist Richard Hamilton. This is the uncut version.) 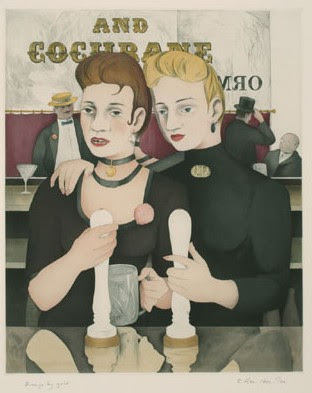 Despite his ‘Portait of the Artist …’ Joyce was no great lover of visual art. He could be downright ignorant about it, in fact, as in his comment, ‘the nails on the wall are quite enough’, or, when he was being painted by Patrick Tuohy: ‘Never mind my soul. Just be sure you have my tie right’.

Going in the other direction, Joyce himself and Joyce’s writings have attracted the professional attention of many artists down the years, not least among them, Henri Matisse. Matisse was actually commissioned to illustrate Ulysses rather than being personally drawn to it, and then chose to seek inspiration in Homer’s Odyssey, never bothering to read Joyce’s novel. That kind of ‘it’ll do’ approach contrasts sharply with the attitude displayed in Richard Hamilton’s exhibition, Imagining Ulysses, at the Irish Museum of Modern Art, which reflects the fifty years Hamilton has been occupied to varying degrees with the self-imposed task of representing Ulysses visually.

Richard Hamilton, who, like Ulysses, is eighty this year, is the artist who gave pop art its name when in 1956 he created a collage full of bizarre juxtapositions called Just What Is It That Makes Today’s Homes So Different, So Appealing? depicting a bodybuilder in a sitting room holding a huge lollipop with the word pop writ large. (The product was Tootsie Pop.) Pop art is misunderstood in the history of 20th-century art, in that it has been defined by its depiction of commerce and products (including people), rather than by its more fundamental motivation of addressing the common, the everyday. That’s the philosophical connection with Joyce.

This exhibition, organised by the British Council, in association with the , has already been shown at the and at the International Biennial of Graphic Arts in , , and . It is an exhibition of 112 drawings, etchings and digital prints, including only seven (out of a possible eighteen, equating to the chapters in Ulysses) finished works (as judged by Hamilton himself), which are then put in context by showing many of the studies and print stages that have led or are leading towards the final pieces. It is the equivalent of having all the drafts for the various chapters of Ulysses in the one place. So it is a reflection of the odyssey has been on all his working life, as much as it is a reflection of Ulysses.

has gone way beyond illustrating the book. It was TS Eliot who put the young off that idea by explaining that the cost of resetting the novel for a limited edition would be too much. Regardless, the passion of ’s engagement with the text was always going to take him further than illustration. Since he first read the book while on, as he calls it himself, the ‘enforced detention’ of national service, he has been obsessed with what the book achieves artistically: ‘It made me aware of a stylistic and technical freedom that might be applied to painting in general. Joyce commands all manner of literary styles and combines then into an unprecedented display of linguistic pyrotechnics, and presents an example that later freed me to try some implausible associations in paint.’

A critic in the Guardian newspaper said recently that ’s work on Ulysses is a masterpiece, and ‘one of the most sustained engagements an artist has ever had with a book, marked by decades of rumination, reading and love.’ If Matisse had trouble with the novel because of the multiplicity of styles Joyce employed, it is that very quality that has occupied both the artist and Hamilton the printmaker so thoroughly down the years, and also explains why it has taken him so long to get the work to this point. He is having to push the medium, his imagination, and his skills about as far they will go to match the achievements of Joyce. It a very exciting aspect of this exhibition, watching one artist rising to meet the challenge he sees in another … and succeeding.

Imagining Ulysses is very much a work in progress, and as much about printmaking processes as it is about Ulysses, which itself is as much about language and writing as it about Bloom and Dedalus in . has sought to give each of his images the consideration, the depth of treatment, the systematic organisation that Joyce gave his work. Each print has its own technical approach, its own knowing cross-references to other works of art, its own obsessive level of detail.

Bronze by gold (of which we see seven versions), echoes Manet’s A Bar at the Folies-Bergère and is ’s visualisation of the ‘Sirens’ episode in Ulysses. Lydia Douce and Mina Kennedy, barmaids at the Ormond Bar, pull beer for their customers including Bloom and the man who has made a cuckold of him, Blazes Boylan. ‘Bronze by gold, Miss Douce’s head by Miss Kennedy’s head, over the crossblind of the Ormond bar heard the viceregal hoofs go by, ringing steel,’ is how Joyce’s text has it in a rather melancholy chapter, full of music, singing and sounds, dealing with themes of love and betrayal. The subdued colours of Hamilton’s final print echo the chapter’s mood and themes, and the content of the print is meticulously faithful to the visual triggers in the text: ‘On the smooth jutting beerpull laid Lydia hand lightly, plumply, leave it to my hands. All lost in pity for croppy. Fro, to; to, fro: over the polished knob (she knows his eyes, my eyes, her eyes) her thumb and finger passed in pity: passed, repassed and, gently touching, then slid so smoothly, slowly down, a cool firm white enamel baton protruding through their sliding ring’. 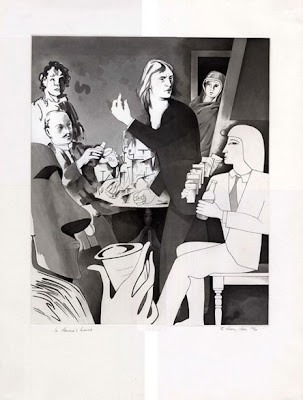 The image for the Oxen of the Sun chapter, In Horne’s House, is equal to Joyce’s text in complexity, and seems to have gone through about twenty stages prior to the finished large-scale etching. In Ulysses the birth of a child in Horne’s house (a lying-in hospital) is paralleled in the birth of language seen through a procession of prose styles. For example, parodying the inflated style of the historian Macaulay, Joyce writes: ‘The high hall of Horne’s house had never beheld an assembly so representative and so varied nor had the old rafters of that establishment ever listened to a language so encyclopaedic.’ In ’s work we get a spiralling sequence of pastiches of historical art styles: head, an Egyptian profile, Renaissance Madonna, Rembrandt self-portrait, Romantic propagandist, Cézanne self-portrait, Cubist still life, Futurist object moving through space, and abstraction. And as in Joyce the composition is so assured, so carefully worked out that the mixing of the styles does not ruin the picture.

Finn MacCool, for the ‘Cyclops’ episode, is developed anachronistically from a photograph of hunger-striker Raymond Pius McCartney to represent the ‘citizen’ who ‘rants against the English oppressors and the Jews from his favourite corner of Barney Kiernan’s low tavern’. How A Great Daily Organ is Turned Out is an arrangement of nineteen hand-sized prints as a newspaper broadsheet representing the ‘Aeolus’ episode, which is set in the offices of the Freeman’s Journal. The images include representations of an ad designed by Bloom for The House of Key(e)s, a childish drawing of Bloom by his daughter that Bloom keeps in his top drawer, and a Tuohy portrait of Joyce’s father here playing Stephen’s father.

Unfortunately, Hamilton has ‘barely considered’ eight of the episodes: ‘My thoughts on Molly’s introspective rambling are beginning to take shape’, but ‘there are large gaps to be filled before Joyce’s cycle, passing from mundane normality to dark night and final peace, becomes apparent in the illustrations’. And, for example, while we do have an image for the opening Telemachus episode, of Buck Mulligan atop the Martello tower overlooking Dalkey and overlooked by the praying ghost of Dedalus’ mother, it is a drawing - the plate for the print has yet to made.

This being a project conceived as a book, we do, however, get one extra, and it so happens, completed work, not corresponding to any of the episodes in Ulysses. It is the frontispiece of ’s imagined illustrated edition of the novel, and it is a portrait of Bloom. Amazingly, nowhere in Ulysses is Bloom’s appearance described; and yet - testament to the depth of character achieved by Joyce - we do get a distinct and clear image of him from his thoughts and actions alone: ‘balding, plump, moustached, soft-eyed and full-lipped’ as Hamilton puts it. The formal pose and classical style of ’s portrait match very closely that of Jewish composer Igor Stravinsky by Picasso. has, thus, succeeded in presenting his ‘sitter’ ‘as if drawn from life’. It is clear that, for , Bloom is the central figure in Ulysses, with Dedalus being relegated to a few appearances alongside others. It is Bloom’s odyssey, because, to Hamilton, pop artist, Bloom is more of an everyman and his story is ‘the story of all mankind at all times’.

While the ‘illustrated’ edition has never, and may never be published (considering ’s perfectionism and methodical approach), the catalogue that accompanies this exhibition is possibly much more satisfying than the book could ever be, at least from a visual perspective. It includes the relevant extracts from the chapters of Ulysses ‘illustrated’ with ’s prints, but also a detailed catalogue, with notes, of many of the preliminary works. Joyce, of course, would fail to see the point of it all, but surely he would recognise the tireless efforts of a fellow artist:

‘I like to think that the route my venture has taken was served by happy chance; the illustrations became a group of independent prints having their inspiration in Joyce – not bound to the words in a straight-book-jacket, but free to speak for themselves about the experience of learning ways to make images from a master of language.’

Email ThisBlogThis!Share to TwitterShare to FacebookShare to Pinterest
Labels: Journalism